A previously unknown layer in human hair has been discovered and could help develop more effective shampoos and conditioners. Researchers using powerful x-ray beams to study hairs found the new layer in a cross section of hair between the cortex – the layer that contains the pigment - and the cuticle, the outer layer. They also found this layer appears to be made of a different form of protein compared to the other parts of the hair shaft – one that is more commonly found in reptile scales and bird feathers. The findings have the potential to radically change how scientists see the structure of human hair.

Dr Vesna Stanic, a scientist at the Brazilian Synchrotron Light Source, said the filaments of keratin in the new layer appeared to be different from the rest of the hair strand. She said: 'We discovered that within the cuticle a key diffraction feature of the alpha keratin is absent -- indicating the presence of beta keratin instead of the alpha keratin phase. Until now, it was believed that keratin in hair had only an alpha conformation, she explained. Beta keratin – which is stacked in pleated sheets – is found in feathers and beaks of birds as well as the claws and scales of reptiles. It is thought this structure is what makes them so tough. It is possible the beta keratin in hair may be also providing a structural role, increasing the strength of the hair. If this is the case it could provide a valuable target for scientists hoping to develop new cosmetics.

Dr Stanic and her team presented their findings at the annual meeting of the American Crystallographic Association, held in Philadelphia.

They had been studying materials used for hair treatments and used x-ray diffraction patterns to look what impact they were having on the hair.

Working with colleagues at the Brookhaven National Laboratory in New York, they were able to see clearly the core of the hair strand, the medulla, the cortex and cuticle with the technique. However, when they looked at the results, they found an unusual looking section between the outer layer of the hair and the cortex.

Dr Stanic said: 'If the goal of the cosmetics industry is to make new and better products for hair, then it's absolutely critical for them to understand the local structure of hair and the effects their products are having at the molecular level.' 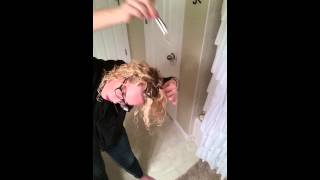 How to Get Your Hair Back

Women's Hair Loss–– Why does it happen and what to do about it!